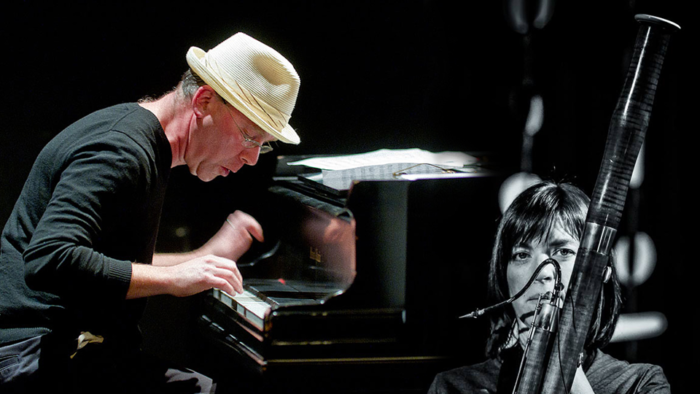 (SEATTLE) Bassoonist Sara Schoenbeck and composer/electronics/keyboardist Wayne Horvitz announced a series of dates for the west and east coast tours taking place in Spring 2020. This tour is in support of SSWH’s first duo album release on Songlines in May 2020 (available digitally April 15) and will span both coasts over the months of March, April and May.

SSWH begin their west coast tour on April 17th at the Good Shepherd Center Chapel in Seattle and will continue down to Oregon and California culminating with a performance at Blue Whale Music in Los Angeles on April 25th and 26th. The tour will resume on the east coast on May 14th at Hallwalls Contemporary Arts Center in Buffalo, N.Y., before culminating at the New School of Music in Cambridge, Mass., on May 17th.

Sara Schoenbeck and Wayne Horvitz first met as musicians in the “company” style improvisation festival “Time Flies” (Vancouver B.C.) in 2000. In 2004 Horvitz formed the Gravitas Quartet with Schoenbeck, Ron Miles (Trumpet) and Peggy Lee (cello). This quartet recorded two CDs and performed throughout Europe and North America. In 2015 Horvitz fused his ensemble “Sweeter Than The Day” with the Gravitas Quartet to create a septet performing compositions based on the poems of Richard Hugo. The project, entitled “Some Places Are Forever Afternoon”, resulted in a CD, a US tour, and an episode of NPR’s “Jazz Night In America”, hosted by Christian McBride. In addition, Schoenbeck and Horvitz have performed in numerous improvised collectives, special projects, and the occasional duo concert.

Schoenbeck has collaborated with, among others, Anthony Braxton, Butch Morris, Mark Dresser, Pamela Z, and Roscoe Mitchell, and maintains her commitment to micro-tonal music and contemporary music. Recent performances include works by both Boulez, and Xenakis, and as a featured improvising soloist with the Mivos Quartet performing Horvitz’ These Hills of Glory (String Quartet and Improviser).

Horvitz, an integral member of the NY Downtown Scene in the 80s, is known for his long-standing collaborations with John Zorn, Butch Morris, Bill Frisell, Robin Holcomb et al., as well as a prolific composer for orchestra, string quartet, mixed chamber instrumentations, and electronics. Recent works include commissions for the Seattle Symphony, The North Corner Chamber Orchestra, and an installation for the Seattle Art Museum. He is the recipient of the 2015 Doris Duke Performers Award, and the 2019 America Prize.

For booking inquiries please fill out our contact form.

Some Places Are Forever Afternoon EPK