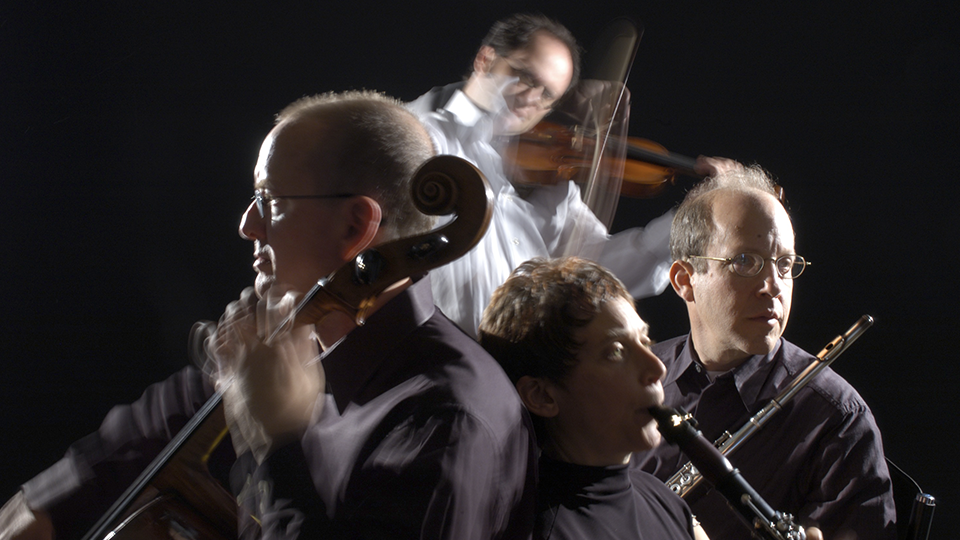 whispers, hymns and a murmur
for String Quartet, Electronics and String Soloist

Continuing in a series for Chamber Ensemble and Improviser, this composition was funded by the Seattle Office of Cultural Affairs and was hosted by the Cornish College for the Arts. The premiere was on March 24th, 2004 and the featured improviser was violist Eyvind Kang. The Koehne Quartet recorded this piece for CD, released on Tzadik.

These Hills Of Glory for chamber group plus guest improvisor debuted in a series of concerts in Seattle, January through April of 2006 with odeonquartet. Guest soloists for the series were Eric Barber, Eyvind Kang, Peggy Lee, Ron Miles, Tom Swafford and Gust Burns.

A Thousand Words for Piano, Cello, Clarinet, Violin and Percussion

This piece was commissioned by Standing Wave. It’s premiere was on May 30th, 2004 at the Vancouver East Cultural Center and featured cellist Peggy Lee in the improvising chair.

The first in a series of pieces for chamber ensemble and improvising soloist premiered in June of 2000 at the ORF Concert Hall in Vienna, Austria. The piece is scored for Vl 1, Vl 2, Vla, Vlc, B, 2 percussion and soloist. Musicians featured in the premiere performance included:

The original movement for Mountain Language was from a commission for the premiere performance of the Harold Pinter play of the same name. Written in 1988, the piece was revised in 1991. In 2001, three additional movements were composed and performed in Vienna at Porgy and Bess. Additional revisions were made in 2002 and performed as a whole in January of 2003 at the Esther Claypool Gallery in Seattle. The series was recorded by the Koehne Quartet in Vienna in November of 2003 and is now a part of the Tzadik CD, Whispers, Hymns and a Murmur.

Commissioned by the Seattle Chamber Players in 1997, Otis Spann premiered at Benaroya Hall in Seattle in 1998. The piece is in 5 movements:

The original performance included improvising intervals between movements featuring guitarist Bill Frisell. In 1999 the composition was recorded for the Periplum label.

Thursday, At Dusk, In Spokane, Washington for Piano and Clarinet
Fanfare (in memoriam, Lester Bowie) for Cello
After a Time for Violin and Tape
Ann Arbor, 1971 for Flute and Tape

These compositions were composed in 1999 as individual feature pieces for members of the Seattle Chamber Players. They were premiered at Benaroya Hall in 2000 after being recorded for the CD Otis Spann in 1999.