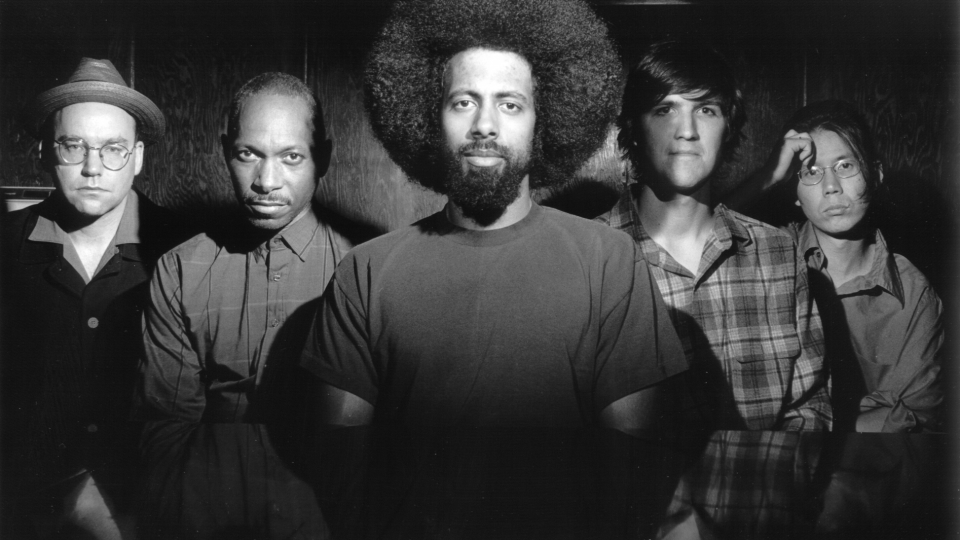 Four Plus One Ensemble:

The ensemble was formed in September of 1996. The group features compositions by composer Wayne Horvitz for an electro/acoustic chamber ensemble. In an interview, Wayne said, “I was interested in getting back to creating music at low volumes, but without losing the electronic element. Julian and Eyvind are obvious assets in any context and Reggie Watts was very intriguing to me because he has strong background in groove-based music, but also a real feel for free improvisation. I had worked with Tucker Martine as an engineer and producer. We got talking about trying to bring to the stage what we bring to a mix down, and decided to give it a try.” The group has two CDs: From A Window (2001) on Avant(Japan) and 4 plus 1 Ensemble (1998) on Intuition (UK). The CDs are available at record stores, online, and here at the merchandise page.

What the critics said about 4 + 1 Ensemble:

“There’s as much chamber music (whatever that means) as jazz (whatever that means) here, and some very strong compositions and playing.  Horvitz plays acoustic and electric piano on this CD, often feeding his playing into Tucker Martine’s box of tricks.  Eyvind Kang and Julian Priester play superbly throughout…  It’s rewarding to listen to what’s going on behind the soloist-beneath Priester’s “Cotton Club” solo, there’s a contrastingly delicate violin and keyboard commentary.”
John Whitten, Earshot Jazz

“Between the bucolic pianism of Take Me Home and the closing Electro-folk stew
of Calder/Snake Eyes, 4 + 1 Ensemble covers a lot of ground. There’s very little grandstanding amid the attentiveness and considered contextualisation. Horvitz evinces a very individual appreciation of rhythm, particularly the ability to govern dynamic tension via its manipulation.”
Tim Owen, The Wire (UK)